‘Japan Story’ is a presentation of 5 years of Stuart Isett’s extensive coverage of Japan as the nation faces a range of social, political and economic crisis. Working primarily with the New York Times, Isett has documented a wide range of events and features that are shaping and defining Japan’s history at the turn of the century.

Few foreign photographers bother to visit Japan to work, preferring instead such ‘exotic’ locales as the Middle East and other war-torn hot spots. In Japan, however, Isett has attempted to document a nation undergoing it’s own quiet revolutions and dislocations with images ranging from the nuclear accident in Tokaimura in 1999 to portraits of Japan’s leading cultural figures, such as Kitano Takeshi. Isett’s slide presentation offers a visual glimpse of contemporary Japan as seen in some of the world’s leading international press. 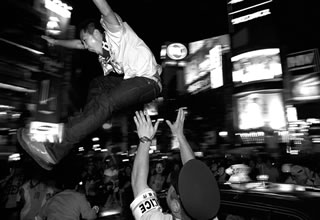 “Japan Story: A nation in transition?”
5 years of photographs of Japan by Stuart Isett for the New York Times and Time Magazine with New York Times Bureau Chief Howard French

After the slide presentation and talk by Mr. Isett, Howard French, the New York Time’s Tokyo bureau chief, will also be speaking about his collaboration with Isett as well as his own work in Japan for the New York Times.

This lecture at TUJ is free and open to the general public: reservations are not required. For more information, contact Kyle Cleveland, Director of Student Services at TUJ, ph. 03-5441-9800 extension 709 (kyle@tuj.ac.jp).